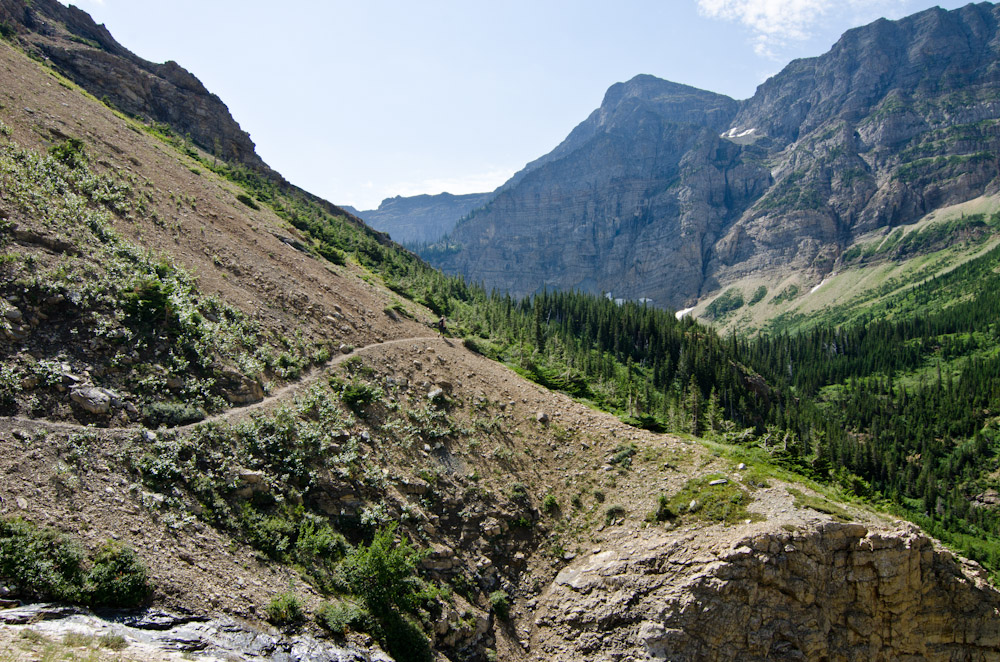 This journal entry is of the first non-driving day of the road trip, and the only complete day spent hiking.

Day 6: Crypt Lake Trail – 3 km driven
Today was a crazy day. I woke up at a decent time, and made my way down to the dock to arrange to go on the boat for the the Crypt Lake Trail. There were probably around 50 people that were going, a few more than I expected. During the boat ride, the guide was telling us things we needed to know about the trail. He started with bears. Apparently, black bears are spotted regularily on this trail, and over the past few days, people had seen a Mother bear and her cub. Then he proceded to tell us deaths were more often caused by people falling off cliffs on these trails….and that there had been several deaths already this year. I’m sure Mom would have been quite worried had I told her he said that.

The boat got to the dock at 9:20am, and for the first km or so, I attempted to keep up with the pack. That may have been a bad idea since I was quickly tired in the first km, and I wonder if that may have contributed to later on. Eventually more and more people were falling back to take quick breathers, and the pack thinned out. Eventually it was just me, with a few people ahead and behind. Everytime there was a good view, I would meet other people there. I wound up talking a lot with a couple from Utah who were into photography as well. There was another family that I kept seeing and we talked a bit too. And I talked to a girl from Europe that was on a North American trip for a couple of weeks. It was nice to have some personal contact like that on the trail, especially one as tiring as Crypt Lake.

Almost the entire trail was uphill. There were a few level stretches, and the odd quick downhill, but generally the trail was always climbing upwards. So there were a lot of switchbacks. It was a bit surprising how quickly we climbed, although that explains my fatique. The first bit was in the trees, and it was still quite beautiful as we could see the lake below, and the mountains out to the one side. Eventually the trail turned inland, and crossed a few creeks and waterfalls. The water was super clear and cold…as it was coming from up high in the mountains. The trail basically went through a valley between two mountains which were quite close together compared with anything I had seen on the road. So the feeling of being surrounded by mountains was intensified.

Eventually the trail climbed above the general treeline. I say general because there doesn’t seem to be a defined treeline here. There were trees beyond the treeline, but they were very scattered, and generally I was hiking through bare rock. The area above the treeline was spectacular. Mountains on every side, and still towering above, even while I could see that the bottom of the valley was very far down. The trail was only wide enough for one person, and there were many times where the edge of the trail was a steep slope downwards…basically the trail was clinging to the side of the mountain, which added to the feeling that I was really hiking on a mountain. There were a couple of really spectacular waterfalls too. In fact, there are always waterfalls to be seen in the distance on these mountains…it seems you can always spot a stream/river flowing down a mountain somewhere.

By the time I got to the last big waterfall, I was incredibly tired. Part of the problem was that above the treeline, there is no shade, and the sun was shining at full power. That and its a continual uphill, which is hard on the legs, and I’m not exactly in shape. I was basically trudging very slowly up the mountain at this point, taking a lot of quick breaks. By now I was the last of the pack, and it was getting late enough that I wondered about getting back to the boat for 5:30. I may have been able to make to the lake at the top, but with how slow I was going, I probably would have had to turn around right away and go quickly all the way back without a break. At this point I was probably 6 km in. I could see where the trail went from where I was and there was still a ton of climbing to be done. So I decided to stop for lunch and turn around after a break. It meant I had to miss the cliff and tunnel that are part of what makes this trail famous, but I don’t think it was really an option at that point.

So I started back after a 45 min break. Downhill was generally much easier, as gravity did 80% of the work.(and I don’t have bad knees to bug me) I was still quite tired and stopped a few times, but I made much better time on the way down. I was doing well enough that I took the alternative fork near the bottom that went by Hells Roaring Falls and Canyon. The river ran through a bit of a rock canyon and made a few nice waterfalls along here. What was really neat was that the mountain across from the trail, looked like someone had sliced the corner off, and there were huge cliffs that went straight down, with the water roaring along at the bottom.

Eventually I got close enough to the end that I could see the lake again. That was a welcome site! I got back, and we had to wait a bit for the boat to come and then we went back to town. The captain of the boat asked if we saw any bears, and no one had, despite all the warnings from the morning.

I’m not sure if this trail will keep me from trying other mountain trails…uphill all the way is a lot tougher than Algonquin style up and down. Either way, it was spectacular, and I’m glad I experienced it.