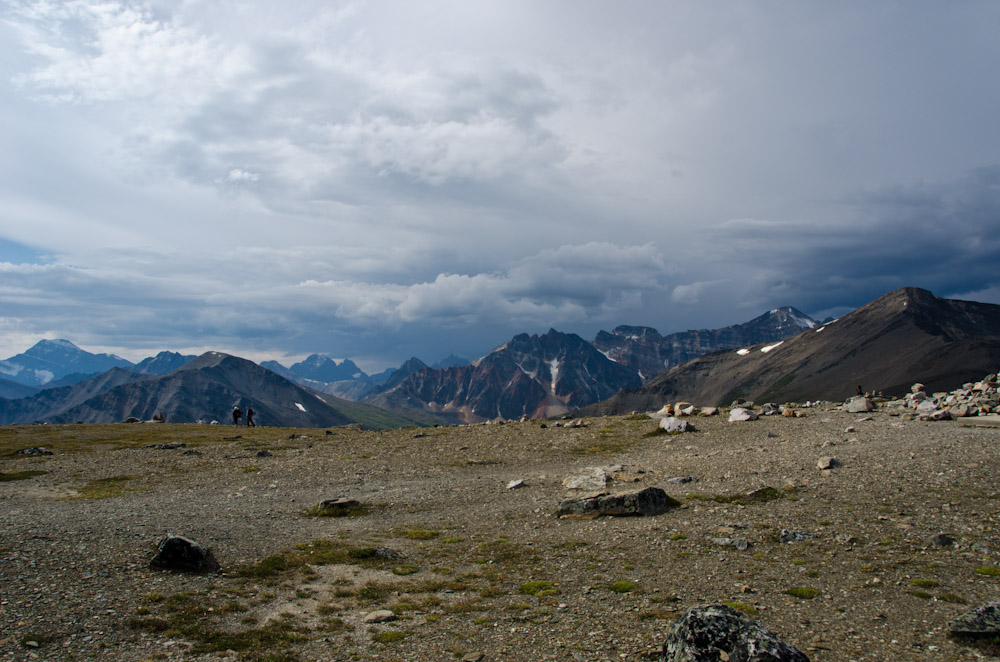 I’ve been wishing I was on the road again.  So I thought I’d post another entry written during last year’s trip.  The highlight of Jasper was the summit of Whistler’s mountain.  If it hadn’t started to rain, I might have spent all day up there….and there are a very few places that can captivate me to that degree.  I would return in a heartbeat if it wasn’t so far away.

Day 12: Jasper – 154 km driven
This trip is again taking its toll on me. It’s been a terrific day, but I’m tired…and I was tired when my alarm went off this morning. Once I got up and dressed in the freezing cold, I drove into Jasper to do some grocery shopping. Once that was done I headed for the tramway. In my head I was debating whether or not to do the tramway. In theory its the same idea as the Banff gondola…and the pictures I had seen online made it look less exciting than the view from the Banff one. But I went anyway, and I’m very glad I did!

I got there right before 9am which is when it first starts running, and right away it was better than Banff. There were only about 6 of us, and we all went up on the first “flight” as they called it. Whistlers mountain didn’t seem like it went as high as the Sulpher Mountain in Banff, but the tramway offered more in the way of experience….and in the end, a view that surpassed anything Banff had to offer. There was a short little bordwalk when I first got off the tram car, but then it was just straight mountain top, with a trail to the summit. It was just a couple kilometers to the summit, but quite a bit of elevation was gained. It was tiring, but I made it. And what a view! On the tramway side of the mountain was the valley with the town of Jasper. That valley is quite big, so all the mountain peaks were decently far away….farther than they had been in Banff. But on the other side of the mountian, there were more mountains, and they were right there, as they were part of the same chain of mountains that Whistlers was. I’m not sure how to describe it…the pictures will show a bit, but the general idea was that of being up close and personal with mountains in a way that the roadside generally doesn’t allow. Part of the experience was that from the summit, no matter which way I turned there was mountain peaks. The tramway brought me above the treeline, and for the rest of the hike to the summit, there wasn’t a tree to be seen. There was hardly any vegetation at all, aside from small clumps clinging to life on the rock.

Once at the summit, I found a rock to sit on, and just sat there for a while, taking it all in. It was really quiet, with only a few other people around, spread out around the rim, doing the same thing I was…enjoying the view. I stayed on the summit for a couple hours, and there still weren’t tons of people. Apparently most people who come up the tramway don’t actually make it to the summit, probably because it is quite the hike for anyone who isn’t in shape(and I think that tends to be the type of people that take the tramway). Also, you can’t really tell that there is this amazing view on the other side until you get there. Until then, it just looks like you are climbing to the top for the sake of it. Either way…in Banff I found it hard to fully appreciate the view from Sulphur mountain because of the throngs of people. But here in Jasper, I could have sat up there all day…it was just so quiet and peaceful…and majestic. 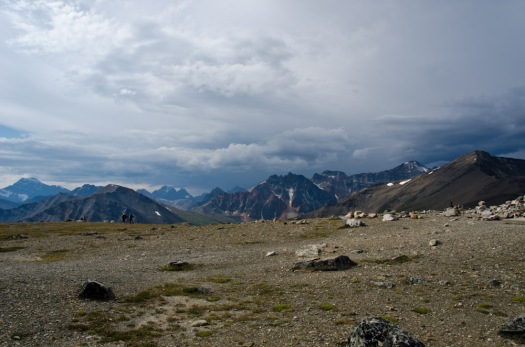 The reason I started to head down was that I could see storm clouds coming, and the rain falling from them. On the way down I really felt just how high I was. When you’re climbing a steep trail, you give no thought to the height, but on the way down, it becomes very real. Parts of the trail are quite steep, and the trail was gravel and rock, so it was a bit slippery. At parts I was going very slowly, noting the steep drop to the one side, and wondering what happens if people actually slip and start falling. I made it down safely, and rode a very full tramway car down to the bottom. Not long after I got in the car, it started raining. Perfect timing!

Now that I’ve become used to mountain weather, the rain didn’t worry me at all, since I knew that it would probably spit for a while, then clear up. So I started to make my way down the long road to Maligne Lake. I made a quick stop at the Maligne Canyon, which is an incredibly deep crack in the rock with water flowing at the bottom. I’m sure my photos just can’t do it justice…it was that deep.

Moving along I came to Medicine Lake, were I could see the storm clouds moving over the mountains. They were clearing though, which was encouraging. After Medicine Lake, the road followed the edge of the mountains for a bit, and there were parts were the edge just dropped off, with no shoulder. It didn’t go down that far, and the road was plenty wide enough, but it was still a bit nerve wracking.

At Maligne lake, I got a ticket to go on the boat cruise to Spirit Island. I had some time, so I stopped at the Lodge and had a sandwich and a beer. It was nice to just relax and eat while looking out over a mountain rimmed lake. I’ll admit, the cruise wasn’t quite as interesting as it was supposed to be. There were a few glaciers, high up in the mountains, that it passed, but otherwise it was just a lake, surrounded by mountains. The real treat was Spirit Island. Spirit Island is the small little island with a dozen trees on it that is in every picture book about the rockies. And it is really beautiful. The mountains lining the part of the lake behind it have been given the nickname, “the hall of the gods”…supposedly by one of the first discoverers of the place, because they said if the gods came down to earth, this place would be were they would meet, because it was paradise on earth. And it is quite the site…so many high mountains, with glaciers and snow clinging to them, and then with Spirit Island in the forground to complete it.

After the cruise I made the drive back to the campsite, had dinner, and here I am. I’m still trying to motivate myself to do some stargazing…we’ll see what happens.