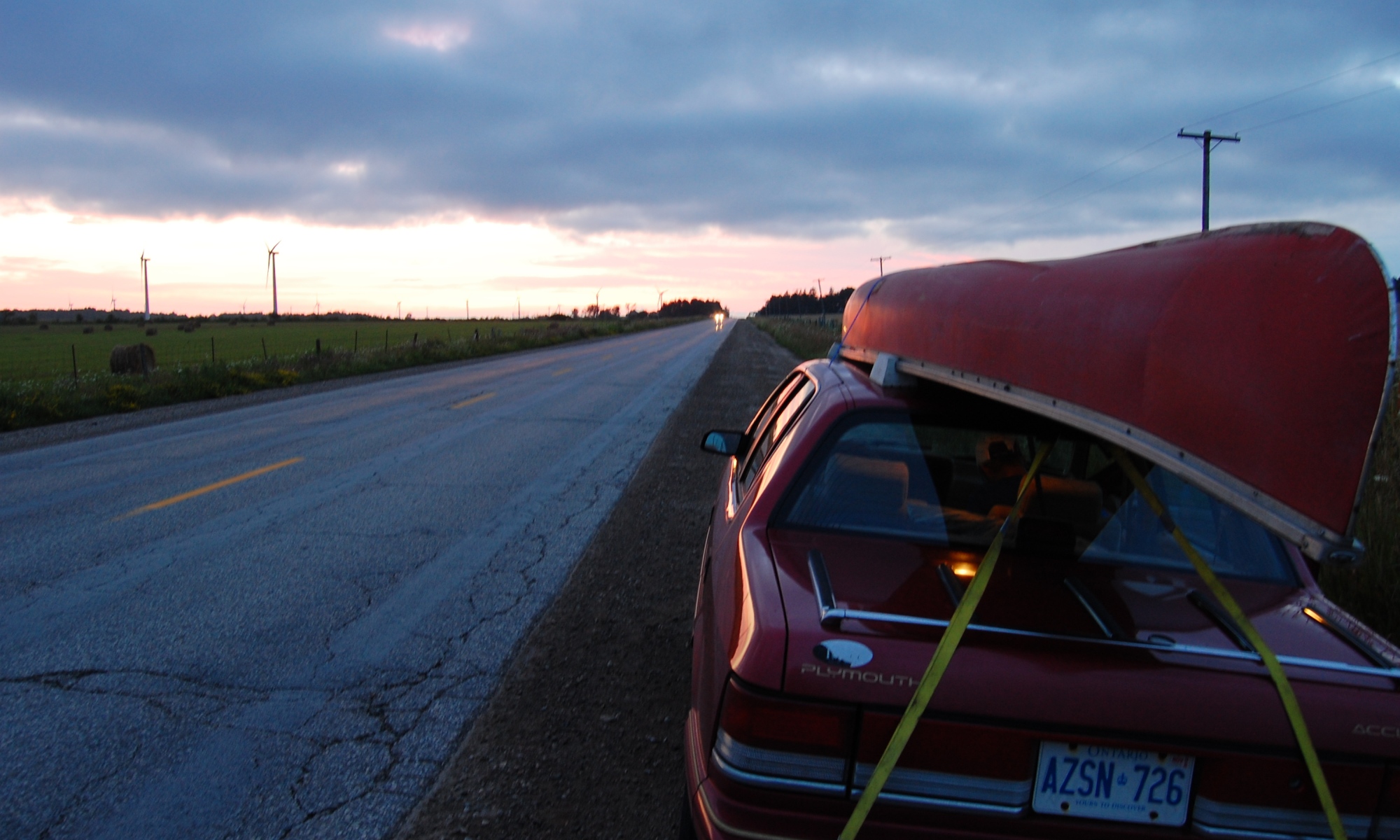 My first car was a 1993 Chevy Cavalier…Jessie.  My parents got it so I could drive home from school on the weekends.  She was an old car, with a lot of miles, but I hot-rodded her up a bit with racing stripes, decals, and some flaming seat covers.  She became my “sports car”.  I don’t remember having much trouble at first, but during the summer of 06, I had several coolant leaks and a gas leak.  It was never enough to leave me at the side of the road, although I did come home with the car steaming once or twice.  At one point the battery died and wouldn’t recharge.  I had to get it jumped a few times, and then had to get a new battery(while the car sat dead at home).  Then there was the fateful trip at the end of summer 06.  Read about it here.  A blown brake line meant I had to limp back to Parry Sound from French River to get it fixed.  That was probably the hardest car breakdown story that I’ve endured, since I didn’t have a solution for most of the day, and I was too far away for anyone to really help me.  Plus it was my first real breakdown.  That car didn’t have a nice end as I wound up crashing it while going too fast around a corner in Dundas Valley in 2006.  I guess I left her by the side of the road…

My parents bought a 1994 Plymouth Acclaim next.  It was the exact opposite of sporty and I never graced it with a name…although we used to joke that she was Gertrude.  It was actually a really reliable car for the most part.  There was that one gas line leak where I lost a quarter of a tank of fuel in 7 km.  I drove that car until I graduated in 09.  It had developed an overheating problem.  Most of the time that meant it would overheat, and then I would sit by the side of the road until it cooled down, and it would be fine.  But there was one drive to hockey in Monkton, with snow howling around my brother and I, where it overheated.  I let it cool down, and then it overheated again.  I think I did it once or twice more….and then I called my Dad who came and towed us back to Mitchell behind the family van.(full size, 12 seater, Dodge Van)  The car went to the mechanic, who couldn’t find anything wrong with it…so I kept driving it.  Around the time I got my next car, it was discovered that the head was cracked, which was causing the overheating….and was basically the death of the Acclaim.

April 2009 was when I bought the first car that was actually 100% mine.  It was a 1999 Chevy Cavalier Z24….named Alex.  Z24 meant that it had a bigger engine, stiffer suspension, and a bit of a body kit….basically a sporty Cavalier.  It took a bit of work to safety the car after buying her, but she was incredibly reliable for the 2 years that I had her.  In the summer of 2011, I had my first real problem.  My brother and I were back from Grundy Lake Provincial Park, and the battery light came on.  I realized that the alternator was having issues and figured out that driving in 4th gear kept the light off.  Once we got to Toronto and hit traffic, we started having issues.  First, the warning lights all started coming on, then the speedometer needles started doing crazy things, and then…just as we pulled up at my brother’s apartment, everything on the dash died, followed by the engine.  I called my Dad, and he suggested that we swap batteries with my brother’s car(also a cavalier), and I drove back to Hamilton with him following, just in case my battery went dead again.  We got home, and my car sat in the parking lot for a week while I found a cheap used alternator and replaced it myself.(one of the the first car repairs I did on my own)  It helped that I was working from home at the time, and didn’t actually need my car during the week.  A few weeks later, I was on my way home to Mitchell, where me and some friends were planning on leaving for a camping trip to Algonquin.  My shifter had been stiff for the past while, but I hadn’t thought much about it.  About half way to Mitchell, the shifts started feeling weird, and then something broke and I couldn’t shift anymore.  And of course I was stuck in 5th gear, which was kind of useless.  I pulled off on the side of the road, and arranged for a tow truck.  I went on my trip to Algonquin without the car(which was hard for me).  I later heard that it might have just been a broken cable, but I was fed up with the car breaking down, and I wanted a new car anyway, so I had already started thinking about a new one.  This was to be the end of Alex.

I spent a whirlwind of a week, trying to find another car, since I was supposed to be leaving on a trip to Cape Breton, Nova Scotia in two weeks.  And so, in the beginning of August 2011, I bought my current 2004 Acura RSX…named Brielle.  She was been one of the most reliable cars that I’ve had….although I don’t drive her in the winter, so that might make a difference.  I’ll finish with more on her.

In August of 2012, I bought a 1998 Jeep Cherokee to be a winter vehicle while the RSX was stored.  The Jeep hasn’t really had much of a name, but the original name I gave her was Joanne, or Jo for short.(yes, I still name my vehicles….so what)  The Jeep was a bit of a cantankerous beast and I’ve had lots of trouble with her.  The first issue I had was with a fan belt bearing in December 2012.  It had been making noise for weeks, but being that the Jeep was my winter beater, I had been ignoring it.  It got really loud the one time on my way home to Hamilton from London, but it stopped.  The next day, I went to the store and the bearing blew up completely, throwing my fan belt.  I was about a kilometre from home, so I let the engine cool down, then drove back.  I then had fun trying to find a replacement part that was no longer made….eventually finding one at a junkyard and replacing it myself.  In January of 2013, I discovered that my water pump was going, so I went about replacing that myself….so that I wouldn’t get left at the side of the road.  In March 2013, the Jeep stalled while turning onto my road in Hamilton and wouldn’t start again.  I was close enough to home that I went and got some help from my housemates and we pushed it home.  Turned out it was a blown fuel pump fuse.  Couldn’t find anything wrong with it, so I bought some fuses and kept driving her.  A few weeks later, I was on my way home to Mitchell, and it stalled again.  I replaced the fuse, and it blew again.  I tried a few more times, till I ran out of fuses, then I was stuck.  We ended up using my Dad’s CAA to tow it the rest of the way to Mitchell.  The stupid thing was we discovered that the wires for the fuel pump were resting on the rear axle and shorting out.  All it took was tying those wires up, and I never had another issue with them again.  The Jeep came close to breaking down a few times in the winter of 2013-14, but always resurrected.  In some ways, my trials with the Jeep were brought on myself, by trying to have a cheap, old, SUV.

That brings us to today.  I had noticed some squeaking noises from my clutch a while ago, but most of the time it wasn’t making my noise, so it was hard to diagnose.  I was driving home from work, and hit the clutch as I was coming to a stop light.  I heard a snap, and the clutch when to the floor and stayed there.  I came to a stop in the left turn lane.  It was good that I was just across the road from an auto mechanic….although it remains to be seen whether they are a good auto shop.  I can’t say I was surprised by the car breaking down….in some senses it’s good, as I would rather it happen now, than when I’m on a road trip or something. 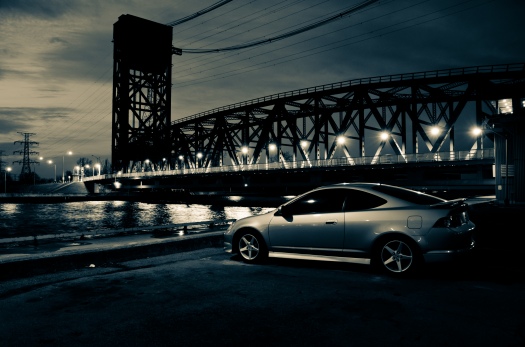 I’m not really sure what my point is here.  I find it interesting to think about what I’ve gone through and in some senses I find it soothing to write about it.  I guess the most I can conclude at this point is that God has been watching over me and my car troubles from the beginning….so why should I worry?