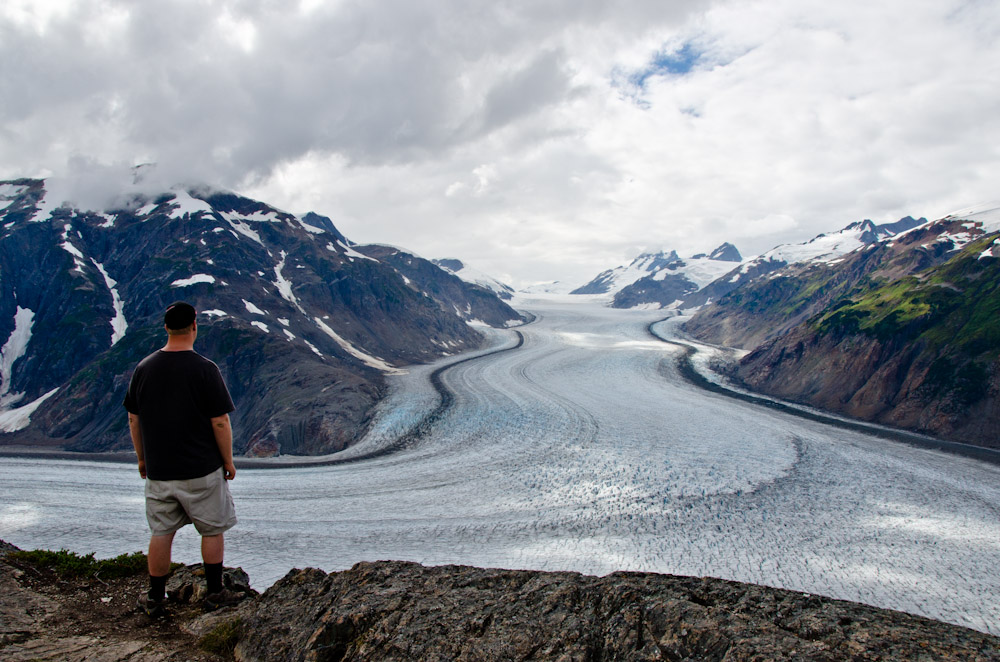 Another journal entry from 2013’s road trip.  Aside from the Yukon, some of my best memories of the trip are from the town of Stewart.  My time there was very much a whirlwind, and plagued by rain, but it was well worth it.

Day 15: Stewart/Salmon Glacier – 303 km driven
What a day! I woke up before my alarm this morning, because it was already getting bright out. I think that being up north is already affecting things plus I’m not used to the extra hour. Anyways, it was sort of cloudy and parts of the mountains were covered…it looked like it would clear up, but it was kind of thick. I took my time taking down the tent, and then decided to leave anyway in hopes that it would clear up. It didn’t at first, but then the clouds started clearing in a way that caused all the mountains to be wreathed with clouds. It looked amazing! 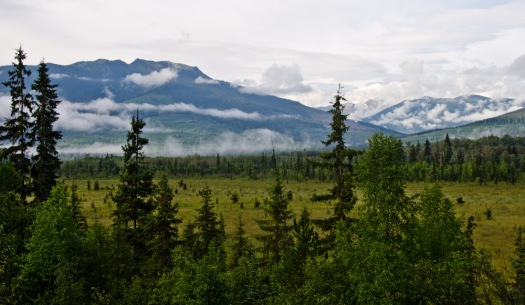 I got to the junction for the highway to Stewart, and started down that road. The mountains were much closer to the road now, and often had glaciers on them. The clouds continued to provide amazing foliage to the mountains. I stopped quite a few times to get pictures. The bear glacier wound up being quite a bit nicer looking than any of the pictures I had seen.

As I pulled into Stewart, things got really interesting. As I passed the rows of houses, it looked a little messy and rundown, but also old. Then I turned onto the main street, and it was like going back in time. All the old wooden buildings are still lined up, with coloured paint peeling. And to add to it, there were a few old vehicles parked on the street, including a 57 Chev. I went to the information building to ask about the Salmon Glacier, but then I decided to just walk the streets of Stewart, and bask in the interesting old timeyness of it. I can’t explain why, but there is a pull to this place. I think its because it is oozing history, like Hamilton. Many of the older buildings had little plaques on them that told when they were built and what they were originally used for.

Once I was done wandering around I decided to find out what the weather forcast was, so I could plan when to go to the Salmon Glacier. I had to go to information and ask….I’m so used to using my phone to figure these things out. Its a bit different not having cell reception. The lady at information said tomorrow was going to be rainy and that today was my best chance at the glacier.

So I set out for Hyder, Alaska. I have to admit, there wasn’t really anything special about it. It was pretty much the same as BC, except for the signs that said Alaska, and the speed limit signs in mph. Hyder is kind of a ghost town, and there were a bunch of abandoned buildings along the main street. I took some pictures then moved on.

The road was paved a bit longer than I thought it would be. But then came the rough gravel. It wasn’t absolutely terrible…but it was very washboarded in places, and there were random rocks. In other parts it was more like driving on rocks instead of gravel. The worst part was where they were doing some major construction, and they had the road all dug up…and I was driving amongst moving machinery, with construction workers waving me ahead. It was pretty bumpy at that point too. The bottom of the car scraped the ground once in the construction bit, but otherwise everything was fine. Soon the road started climbing out of the valley. It clung to the mountain, with one side being an edge that went down quite steeply into the valley below. I stopped at a few of the lookouts. Once the toe of the glacier came into view, it was really quite amazing. Driving along the road, I could glance out my window, and it was just filled with glacier.

I reached the top, grabbed some sandwiches from the cooler, and just sat there taking in the scene before me. It really is beyond explanation. Ice everywhere…where other glaciers I’d seen were clinging to the side of mountains, this was a massive sheet of ice that went on and on for many kilometers. And all laid out in a perfect way so I could take it all in. This is where I really began to appreciate how far away from civilization I am. On the drive here, there were few cars on the road, and now at the most amazing thing to be seen in Canada, and there were two other vehicles at the summit. By the time I finished my lunch, I was the only one there! So I wandered around taking pictures by myself with just the sound of moving water. Near the tail end of my time some people showed up, but that was it.

I originally had plans to camp up at the summit, but there was rain on the schedule and I figured it wouldn’t be a good idea to wait until tomorrow when the road would be wet to drive back. So I headed back. Just as I got to the paved side of the road, it started pouring rain. I went through Canada customs with no problem at all, and headed back to Stewart. I was originally going to camp, but decided to try to stay in the Ripley Creek Inn, which looked kind of cool as it was using all renovated 120 year old buildings. So that’s where I am now. I went out for dinner and had Salmon…on the same day that I saw the Salmon glacier.

Not sure what the plan is for tomorrow, probably depends on the weather. I may stay here another day. We’ll see.