Monday | Aug. 10, 2015 @7:30pm
It’s been a bit of a rollercoaster day. To start with, we woke up on the ferry. Due to the rainy weather we had decided to sleep in rather than waking up early for the sunrise. We got up around 8 and by then land was already in view. Our first time looking at Newfoundland. The rainy weather worked to our advantage as the land was shrouded in fog which gave it an air of mystery. Our first sight of land was small from a distance but it was slowly getting larger. The boat was going pretty slowly at this point and an announcement was made that we would be docking in an hour. We went inside and sat in the lounge for a bit. We eventually saw that the land was getting closer so we went back out on the deck. I was completely blown away by what I saw. So many different forms of land, rising out of the sea and with a decent amount of height as well. We were also somewhat surrounded by it. There was a bit of rain falling and it was windy but that didn’t stop me from getting some good pictures. The port at Argentia is in a small finger of water off of a decently small bay, surrounded by rock cliffs, which made it quite the first experience of Newfoundland. We kept changing sides of the ship to take the whole view in.

Once the ship was docked and we got off, we started driving for Cape St. Marys. It was dark and cloudy but only spitting rain. The road was extremely rough. It was paved, but absolutely full of massive pot holes, which made its twistyness somewhat hard to manage. We accidentally passed the road for the cape, and decided to continue on since it was quite foggy. The rain stayed away for the most part but the fog persisted.

We made our way to the Irish Loop around the Avalon Peninsula. The weather cleared up a little and we enjoyed the better pavement and the twisty roads through the small towns along the coast. I’m very surprised at how un-tourisized everything is, especially considering this is supposedly the more visited part of the island. St. Vincent was a highlight as the road crossed a large sandbar which had massive waves pounding against it. We stopped to explore and the wind was crazy strong. It made it hard to open the doors on the car and when I talked it would blow my cheeks open. The sun was also shining at this point in the day which was nice.

We headed inland again and noticed how the inland had very few trees and was more like tundra. It was very different and very cool. I wasn’t expecting to see things like that until the northern part of the island. The fog returned and then left again. At this point I realized that I needed gas and figured it would be fine since there were so many small towns along the way. But it seemed none of them had gas stations. Most were just a group of houses with a small harbour and a general store. Since I was running out of gas I didn’t stop to take pictures along the better parts of the tundra when there was no fog. It was interesting how there would be random shacks/cottages down very rough dirt roads, just sitting out in the tundra. I would love a place like that if such a thing existed closer to Ontario.

We got gas just in time and decided to turn back to get pictures of the tundra. But the fog had settled in again and covered everything. We decided to take the road to Chance Cove Provincial Park in hopes of camping there for the night. The road in was extremely rough and long, and then it turned out that there wasn’t really much at the other end and no good places to camp, so we turned back.

We made our way north for the marked campsite on the map. I hadn’t planned where we would stay tonight so this is what I get. We turned down the road we thought would lead to the campground, but it was a dead end down another long rough road. I was getting worried that we wouldn’t find a campground, but it turned out we had turned too soon, so we made our way to the La Manche Provincial Campground.

It seems to be very unorganized here…one of the worse provincial parks I’ve been in. Hopefully they all aren’t like this. It was looking like rain so we held off on getting firewood until we setup. It looked fine so we got it. As I was chopping the wood, it rained a bit but stopped. Then as I was setting up the fire it really started to rain and didn’t let up for a while. So much for that fire. So we’ve been spending the evening eating dry food in the tent. Tomorrow the weather is supposed to be decent and it’s onward to St. Johns. 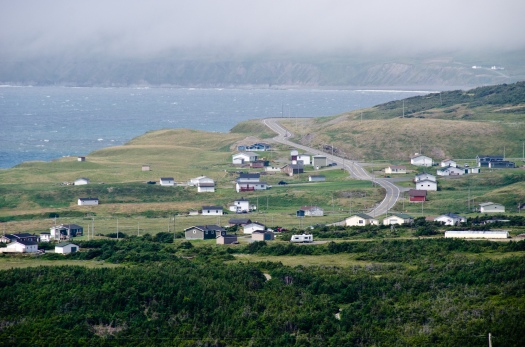