It just keeps getting better!  I had a spectacular day driving up on Mount Mac.  Initially I was thinking:  another mountain road…I’ve already driven two of them.  This was well worth it.  Apparently I managed to accidentally save the best for last during my time at Whitehorse.

There are two roads up Mount Mac.  The front way and the back way.  I had seen the back way from Fish Lake Road when I was hiking in the area, so I went that way.  It got very trail like very fast.  There was a bit more than one lane, and lots of medium sized rocks with many uneven portions.  A great trail ride!  Evidence that I was on a great trail: the only traffic I encountered on the first portion were ATVs. 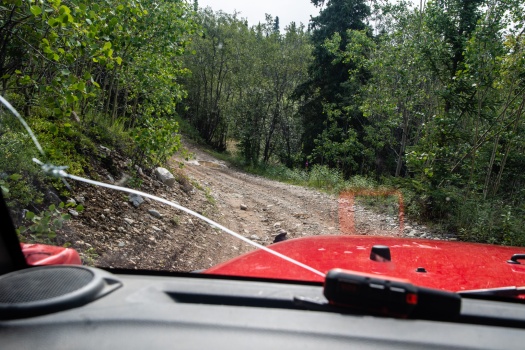 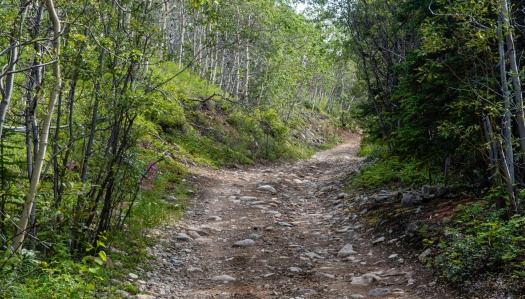 The road/trail reached a nice viewpoint, then climbed steeply for the next bit.  After passing those ATVs, I was beginning to think I truly was on a trail.  They didn’t seem to think anything odd about seeing me though.  The steep uphills were fun, and one or two of them had me staring at the sky like I was riding a roller coaster.  4×4 was needed.  The views were getting terrific at this point as I was above the treeline, so I pressed on.

The trail then popped up and joined a more normal looking road that was headed to the summit.  My guess was, this road was the “front” way in.  I was correct, as I took that way back down at the end of the day.

At the summit there was some sort of radar installation with barbed wire around it, but there was a clear, rough trail around the area.  From there it went on into the distance.  I could see the road down in the valley and across the way.  One could spend days exploring here.  I spent a few hours, stopping to take pictures.  The top of the mountain was relatively flat and rocky with short ground cover, so you could see for miles. 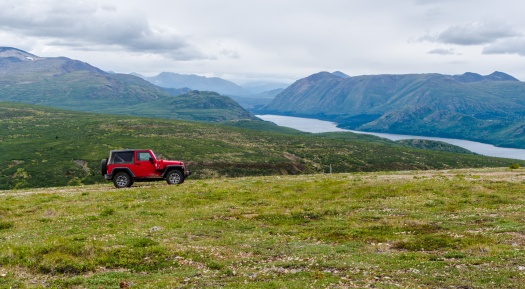 It was already kind of rough, slow going and was getting worse…that and the road seemed to be going back down the mountain, so I turned around…but what a day!!  This has exceeded my expectations!  And to think, so far all the Yukon trail driving I’ve done is just 10-15 min away from Whitehorse.

On Sunday after church, I plan to head to Atlin, BC, which is a small mountain town just below the Yukon border, and only accessible through Yukon.  I’ll be back in Whitehorse every now and then, so who knows…maybe I’ll be up Mount Mac again…