Top of the World Highway is a very unique experience filled with grand views.  The road runs from Dawson City to the Alaska border and it follows the heights of the hills instead of the valleys.  It was originally constructed in the early 1900s to service mines in the area.  At the time, it was probably the farthest north you could drive in Canada.  Today it’s a well maintained, gravel road of awesomeness.  I’m excited to share these pictures with you, as they captured the grandeur far better than I thought they would!

The road starts climbing right away after Dawson and the views start to become amazing…although often they are veiled by trees at the side of the road.  I’ve learned a new use for the Jeep: the front bumper works great as something to stand on to get me extra height to take pictures!

One interesting thing I’ve been learning to deal with as a photographer is the angle of the sun.  Up here the sun never reaches the top of the sky.  It stays in the south.  That means pictures to the north generally work all the time, but pictures to the south work best either just after sunrise or just before sunset.  The view in the distance was quite hazy, and I gather that may be partially due to smoke from forest fires…but it didn’t hurt the view at all!

I’m half way into my trip, and I’ll admit: I’m tired.  Days like this just invigorate me!  They remind me why I’m on the road!

As the road went on it rose out of the tree line entirely.  The views became utterly amazing.  I love it when I can see the road snaking off into the distance, and there are so many opportunities for that on Top of the World.

Just before the border, the road climbed to a summit.  There was a short trail to the actual summit that was probably only a short distance above the road.

I decided to stay on the Canadian side and explore old mining roads on my way back.  One of the great thing about areas like this is that you can see other roads off in the distance and get an idea of where they are headed before you even drive down them.

I set off down a mining road that I could see from the summit. (pictured above)  It was a fun road and there were a few pieces of machinery left behind.  When you are on Top of the World, all side roads lead down, so I didn’t follow it all the way, but it was worth the short detour.

The next side road I took turned out to be an old portion of the Highway.  It went higher than the new road and offered great views.

The next road I drove was the side road to Clinton Creek and Forty Mile.  The road was in good shape and was a fun drive all the way down to the river valley from Top of the World. 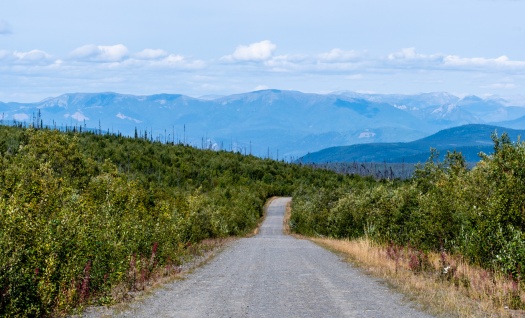 Forty Mile is the original gold rush town.  It was established in the late 1800s, before Dawson, and was the oldest proper town in Yukon.  After Dawson became popular it dwindled in size and is now abandoned.  I was told later that you can walk to the townsite where there are a few old, restored buildings….but it wasn’t well signed and I missed the trail.  I’m still considering returning to do that…the road is worth another drive anyway.

I drove back up the Clinton Creek Road, very satisfied after a long day.  The original plan was to find a spot to boondock for the night, but I hadn’t seen any good spots so I was headed back to Dawson.  As I neared Top of the World, I saw a dirt track with a sign saying, “not maintained. use at own risk”.  Well that says to me that I must drive it, and it looked like it went higher, so I set out.  I met some ladies who were picking blueberries and stopped to chat.  They told me the road went to the top of the hill where there was a radio tower.  So I kept going.  The views were absolutely glorious! 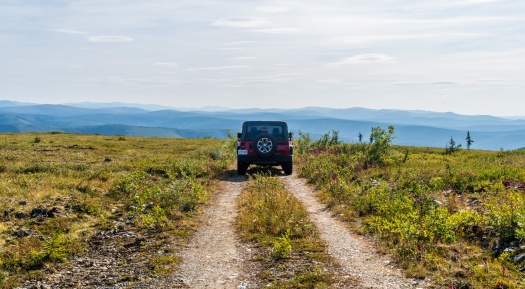 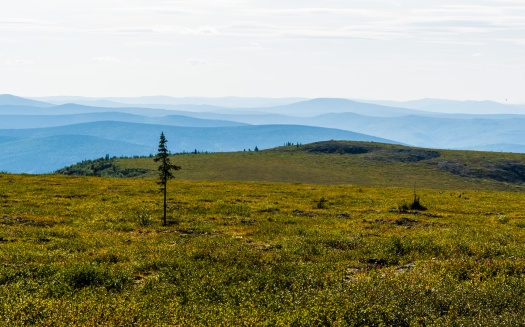 What a glorious day!  Spectacular views, exploring, and Jeeping.  A perfect combination.  And in such a unique area!  I’m so thankful I had this opportunity.

Next I hope to head up the Dempster, spend some time in Tombstone Park and then onwards to the Arctic Ocean.  But there is currently a lot of rain in the forecast, so I may stick around Dawson a bit longer and maybe even drive back and see the Forty Mile townsite.  I do want to hang back a bit so that the possibility of fall colors is greater on the Dempster.  I have extra days at this point so I’m just taking it easy.