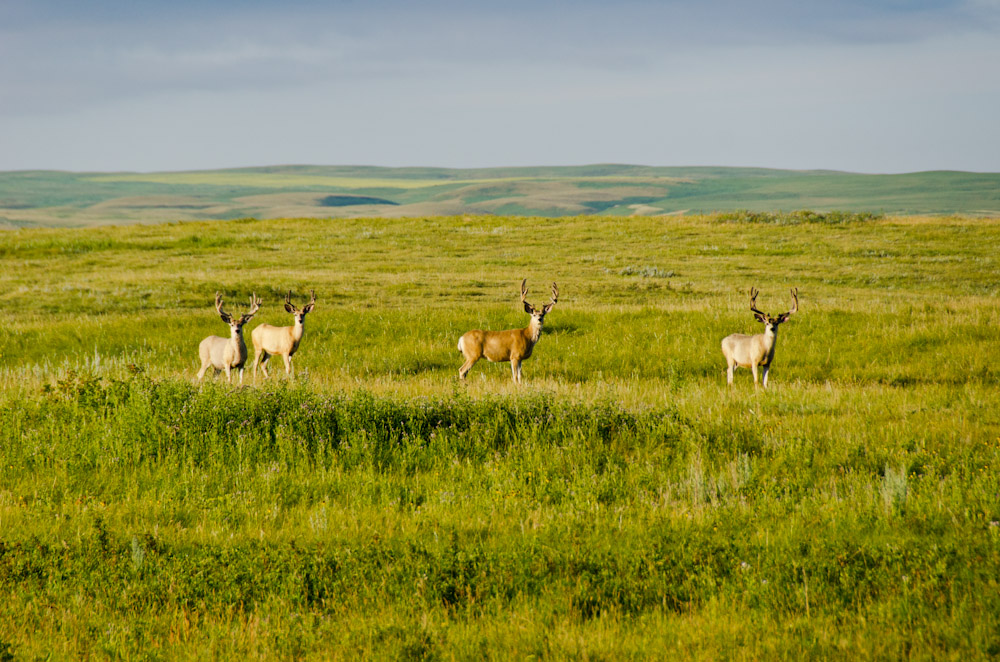 Having these pre-written journal entries to post has made me lazy.  I do have some more philosophical entries percolating that will follow at some point.  Until then, I hope you enjoy the story of my road trip.

Day 5: Cypress Hills to Waterton Lakes – 422 km driven
This morning I woke up a bit before my alarm as the sun was rising and lighting everything up. As I put everything in the car, three turkeys wandered through. That was unexpected! I set out on the same road I came in on, and because I was refreshed and the road was less busy than yesterday, I stopped a bunch of times and got some great pictures. I even saw 4 bucks grazing together by the side of the road! I got quite a few good pictures.

Once I was back on the trans-Canada, I went back to just driving. The countryside across Albert reminded me of farmland in Ontario, except there were a lot less trees, and it was flatter. I made it to Lethbridge which was where I was planning on getting gas and ice since it was the last major city before the mountains. I wound up missing my turn, and had to turn around. At least in Alberta it’s pretty easy to turn around on an expressway. Expressways out here don’t have onramps, and instead just have regular intersections. So to turn around you just go to the next intersection, turn left, and turn around. Being lost in a city always reminds me of Montreal.

It wasn’t far out of Lethbridge that I could see the shadowey shapes of my first mountains!! And they were still 100km away! As I drove closer, they continued to get bigger and different details would become apparent. It was a really cool experience.

The mountains are just amazing. Far better than any picture could ever portray. As I drove amongst mountains for the first time, I was overwhelmed. I wasn’t even stopping to take pictures because there were mountains all around me and I wouldn’t know where to begin. I discovered that mountains can also be quite annoying, as clouds easily darken some of them, and its hard to come up with creative shots to take that aren’t just the typical pictures people take of mountains.

My campsite is out in the open, and I can see mountains on all sides! The sky is also open above so I’m looking forward to seeing the stars…if its not too cloudy that is. My campsite doesn’t have a firepit, and is a walk-in….but oh well, I can put up with that sort of thing for the sake of mountains.

Once I had setup camp, I went out for a quick lunch at a small local shop that sold wraps. Then I drove the Red Rock Canyon parkway, which is really this little two lane road that winds through the mountains with lookout stops all along the way, and the Red Rock Canyon at the end. It was amazing, although a bit annoying that it was getting really cloudy out and it looked kind of menacing. It did end up raining for a short bit.(that means it has rained every single day that I’ve been on this trip…and there is more in the forcast…blah)

At this point I was feeling really tired. I think this trip is taking its toll on me. I’ve almost driven a total of 4,000 km. So I headed back to the site. I may go and sit at the water for a while…since its right there. This weather forcast is getting a little annoying…because tomorrow is probably my only chance to hike the crypt lake trail without getting drenched. And yet it would be so nice to have a chance to take a day off of the tiring stuff. I would also like to stay up late and see stars but I don’t think that’s a good idea if I’m going on a crazy hike tomorrow.