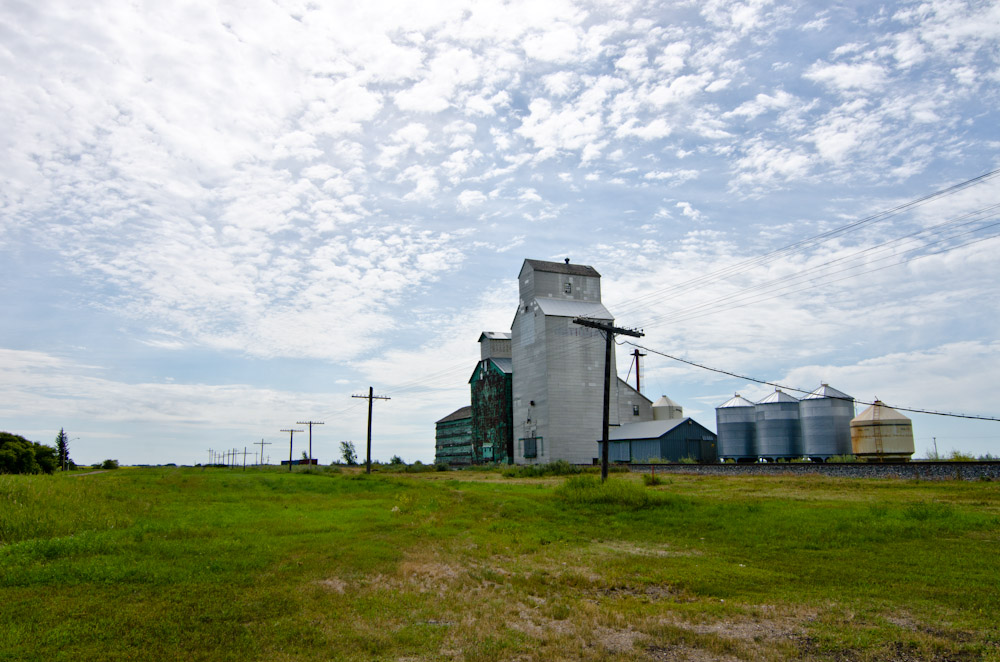 Day 4 was the drive across the prairies and the first really exciting part of the trip.  I realized while reading through this entry that I had left out the fact that it did rain quite hard while driving in the afternoon.  Apparently the rest of the day had completely overshadowed the rain, so that by the evening, while writing, it was a completely unimportant detail.  This made me realize:  my road trip self is an optimist.  I won’t let a day of rain ruin a good road trip.  This is completely unlike the pessimist that I am normally…  I’m not sure why this is, but it’s interesting to note.

Day 4: Whiteshell to Cypress Hills – 1,284 km driven
Today was the first really different, adventurous day of the trip. It all began at 4am in Whiteshell. I was glad to be out of there and away from the rain and the loud campers. For the first bit of driving it was still pitch black out. I drove a bit slower as result because I wanted to lessen the chances of hitting something like deer or moose. Speaking of which, I haven’t seen a moose yet this trip. Anyways, once it started to get light out, I could see that I was leaving the Canadian shield. The transformation happened pretty quickly, and it seemed that all of a sudden I was driving through flat prairie type land. Of course Winnipeg came up rather quickly at that point. I decided to drive through it instead of taking the bypass just to see what the town was like. It was actually really nice….a lot nicer than I expected. And then I made a wrong turn and wound up taking the bypass anyways.

After Winnipeg I really started to appreciate the prairies. At first it was the sky and the clouds and how wide open everything was. Then I got to a place where you could see for miles and miles…as far as the eye could see…literally. The different colours looked great too, with the yellow canola and green grains. As I was driving along I kept seeing those old style grain elevators a ways back from the highway. I debated driving out to find one, but decided to wait. Luckily there was one right by the highway, so I got some pictures. It was part of a very small town that seemed to be half ghost town.

The highway was interesting because it was four lane expressway, and the speed limit was 110, but there were no proper on or off ramps. So getting on and off the highway was kind of “fun.” Also, at various times the other two lanes would be farther or closer. At one point they were far enough that there was a small town in the middle!

As I got closer to Alberta, I started to see small “lakes”, but I think they were more like big puddles, due to the amount of algae on them. I also passed what appeared to be some sort of salt mine with huge piles of white stuff outside.

I gained an hour when I crossed over into Saskatchewan, so I was getting hungry for lunch early….but I decided to wait until Regina. I was already quite hungry by then, but the traffic was really bad and I didn’t see an easy place to get off to eat, so I kept going. I wound up having lunch in Moose Jaw instead. Then I went through the whole thing of almost running out of gas an so-on. So basically, the afternoon part of the trip was a bit tiring and I wasn’t appreciating it as much.

Finally I crossed the border into Alberta. Not long after I made the turn for Cypress Hills. The scenery was amazing, as the prairies became a bit more hilly, and there were grassy coulees. The trees were pretty much gone and most of the land was being used for ridiculously large cattle grazing areas.

I got the Cypress hills and there was actually a campsite! And it wasn’t raining! So for the first time this trip, I had the perfect camping evening with a proper campfire and cooking and everything. I even had a nice view of the sunset from my campsite! It’s crazy windy here. Probably partially because my campsite is near the top of the hill. The wind has a roar to it that you hear before the wind hits. Pretty awesome!

Also, I made a quick tour to the lookout points, and WOW, they were amazing! Cypress hills is the highest part of the prairies in this area, and you can see for miles and miles and miles and miles. Its definetly the best thing I’ve seen yet on this trip. Almost enough to make me want to stay another day instead of heading to the mountains tomorrow.

I also found out that Cypress hills is a dark sky preserve, so I might try to get some star shots tonight. We’ll see what happens. Either way, MOUNTAINS tomorrow!!!