My final backroad experience wasn’t quite as epic as the Canol road, but it was still an adventure. Nahanni Range road holds the distinction for being the backroad that really made me long to return to Yukon. I had seen some blogs and pictures from this road and really wanted to experience it myself. 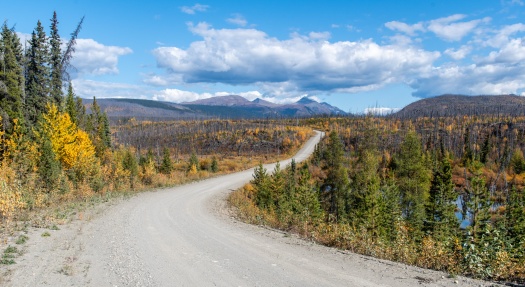 The road was built in the 60s to service the Cantung Tungsten Mine…which is actually just over the border in Northwest Territories. So, similar to the Canol road, this road crosses into NWT and then ends. The tungesten mine is currently inactive and has been closed down for something like a decade. Apparently, the known tungsten reserves in the mountains along the Yukon-NWT border account for 10-15 percent of all tungsten in the world…and most of the rest are in China. I’m guessing that means tungsten from China is cheap, which makes running these mines in Canada not worth the money. Occasionally they start up when the price is right.

The interesting thing is that while this road is well known by tourists, the locals aren’t as aware. Although, I discovered that it is known by different names. Some know it as the Cantung road or the Tungsten road…despite the fact that it’s official name is Nahanni Range. 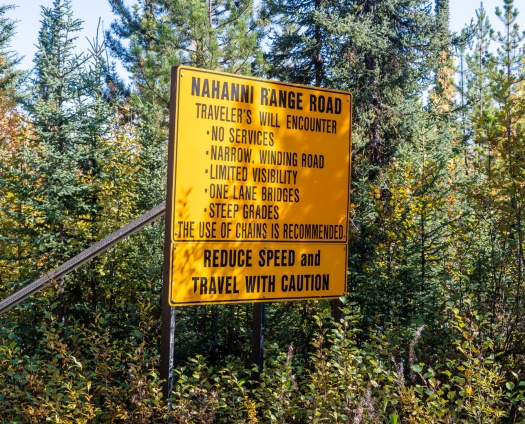 As you can see, there actually is some warning about what you are getting into at the beginning of this road. The fun part is, compared with the North Canol, this was actually a smooth, relaxing drive. And I don’t know why they say it’s narrow. It’s not. It’s a pretty standard gravel road…or maybe I just got used to how seriously narrow the North Canol is.

The beginning of the road is a nice drive, with the mountains slowly getting bigger. Unfortunately the colours were a bit muted compared with my previous days. I had missed peak colours here. In some ways I wish I had driven this road and then Canol…to keep my standard attempt at doing the best last. But I’m sure if I had done that I would have missed peak colours on Canol, so I’m glad it worked the way it did.

There is actually a Yukon Campground in the middle of the road, and I stayed there both nights. It had nice views of the mountains and was nice and quiet.

My second day I started down the road. There was an absolutely amazing green lake, that was still and the reflections interacted in interesting ways with the deep green colour.

The road then started to open up and it ran through a mountain valley, while the trees melted away. It was a bit disappointing that the colours were really faded here. However, the bits of red that where still there gave the grey a bit of a purple look that was different once again from anything I had seen. 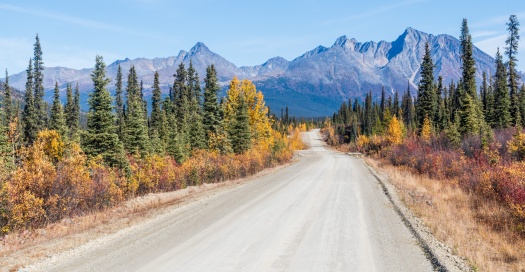 At the end of the valley the road turned into the mountains and it wasn’t clear at first where it was going. Then it turned back on itself and went through a mountain pass. These passes are always fun as the mountains are close and there are great hill climbs. 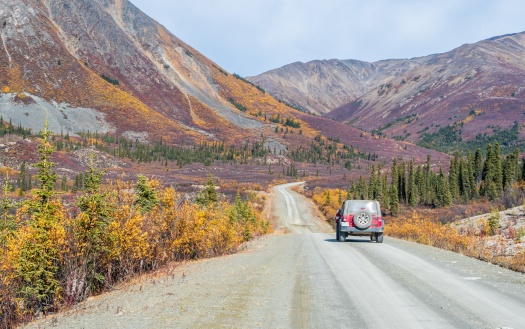 There was an interesting sign that I had heard about which said there was a dead end ahead. There wasn’t…it was just a sharp corner at the end of a “steep” downhill. (I’ve been on some crazy hills…the public definition of steep road feels like a normal road to me now)

The colours were even more muted through the pass. It looked like they would have been spectacular at peak. I’m a bit disappointed that I didn’t see the peak, but considering this is one of the few disappointments on this trip… It’s interesting to note that while it was a “perfect” sunny day, I actually missed some of the moody clouds that have accompanied me throughout my journeys. A perfect sunny day just seemed less interesting somehow.

Not long after the pass, the road ends abruptly at the Cantung Mine. As usual for these roads, it was a strange end. The mine didn’t look active, although I had seen a transport truck with an empty flatbed coming the other way. There was actually very little traffic in general. Throughout my 3 days on the road I think I saw 6 vehicles. 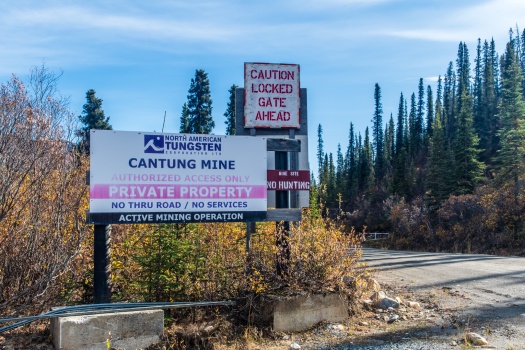 I turned around, but I had something extra planned. Before the mine there was another road that turned off. I had extra fuel, so I planned on driving a bit of that.

First I had to add some gas from my gas cans. I had discovered the night before that I had forgotten my nozzle by the side of the road in Macmillan Pass on the Canol road. So I rigged up a water bottle with the bottom cut off to act as a funnel. It worked great! (btw, I have a rule on roads like this: always add the extra gas before the point of no return…just in case something goes wrong)

One thing that made Nahanni Range a bit more of a remote road was that it was farther from the gas station. While the North Canol road had a gas station right at the beginning, there was nothing near the entrance to Nahanni. I had to gas up in Watson Lake, which was just over 100 km from the beginning of the 200+ km road. In the end I went 640km without a gas station and my gas cans were more useful than I thought they’d be. 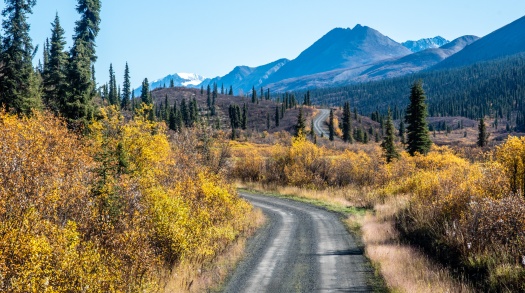 So I set out down the road to Howard’s Pass. I had very little info about the road. No one I had talked to knew much about it. Some info online had suggested that it was a restricted mining road, but I gathered the mine had gone quiet, and I didn’t see any signs saying I couldn’t drive it.

The road wound out of the mountains, through a smaller valley with some lakes and rivers. I followed it for a bit more than 20km. It was smooth and in good shape. I passed a pickup truck going the other way. 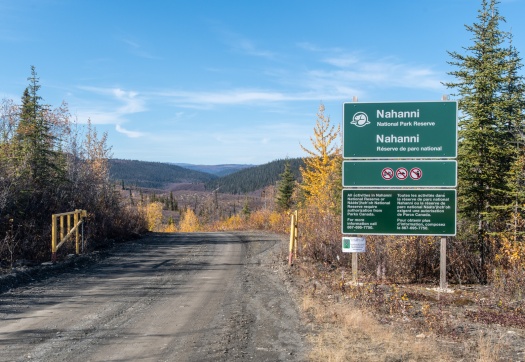 Then I came to the gate. In my research, I had seen hints that the road went through Nahanni Park, but again, info wasn’t easy to find online. I didn’t have a park permit so this was the end of the exploration. I’ll admit, I considered just driving in anyway…but it later turned out to be the right decision to turn around.

I made my way back up the pass. There had been no warning about going over the NWT border, but I imagine this sign marks the border. I saw it on my way back into Yukon.

Shortly after, I approached 2 pickup trucks on the road. One was the pickup I passed on the Howard’s Pass road, the other turned out to be the Nahanni Park Warden. They were friendly, but asked a lot of questions to make sure I hadn’t driven into the park without a permit. I’m guessing the other guys told them I was headed in that direction. I’m glad I turned around. If I had known what was coming, I might have tried to get a permit ahead of time…oh well. Have to leave something for me to explore if I ever come back to Yukon!

I enjoyed the drive back down the valley to my campground. That night was quite cold and got below zero. There was ice in my water the next morning. For some reason I was wide awake before the sun came up fully, so I got up, made a coffee and did some reading…but I was freezing. So much so, I actually went for a 3 minute jog through the campground to warm up. As I was sitting, the sun made it past the summit of the mountains and burst forth! It was so warm! I don’t think I’ve ever been so thankful for the sun! It reminded me of a line from In Christ Alone. “Then bursting forth in glorious day, Up from the grave He rose again!” In the same way that the rising sun brought warmth to the cold valley, the rising Son of God brings warmth to cold, dead hearts! I don’t have any pictures from that moment…but it was powerful and will be in my top experiences from this trip.

This marks the end of the backroads chapter of my trip. Time is going faster and faster, but it’s not over quite yet. Onwards to the last hurrah!