My drive on the Cassiar Highway through northern BC was wet and foggy. It wasn’t an exciting time, but I thought I should write about the bad along with the good. Even the rain makes for interesting pictures and stories. This post is a bit late because northern BC has zero cell phone coverage, and I wasn’t able to get any internet along the way either.

I left Stewart on a high after my time at the Salmon Glacier. I was excited about driving north up the Cassiar Highway.  It’s a bit of a remote highway with a special flavor of desolation.   Last time had been very rainy and I know I missed out on seeing a lot of sights because the fog was covering them. This time it was a bit cloudy, but looked like it could clear. Instead, as I went further north, things got misty, then turned to outright rain. 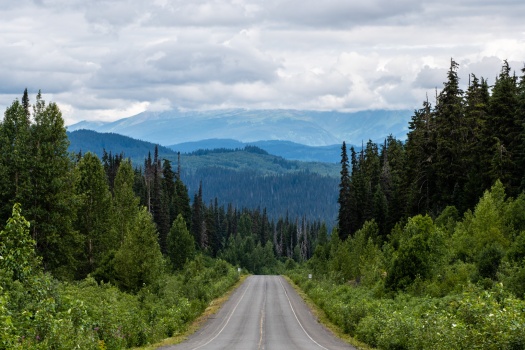 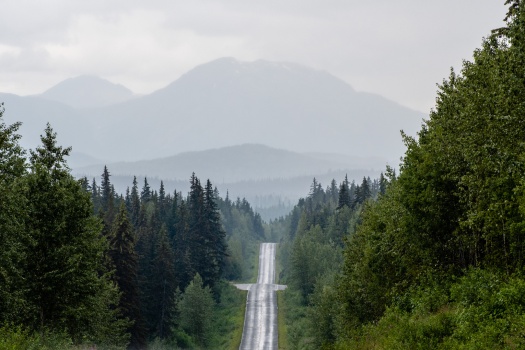 At first the rain made the mountains look more interesting, but eventually it was raining hard… I stopped at a pull off area and read for an hour, but the rain didn’t subside. I didn’t really have a plan for where I was going to stop that day, so I moved on to the next available campground, which was Kinaskan Lake. It was a nice stopping point as I had a campsite right next to the lake. I made it 270km, so it was a decent day. It stopped raining that evening and I went for a walk and saw a beaver… 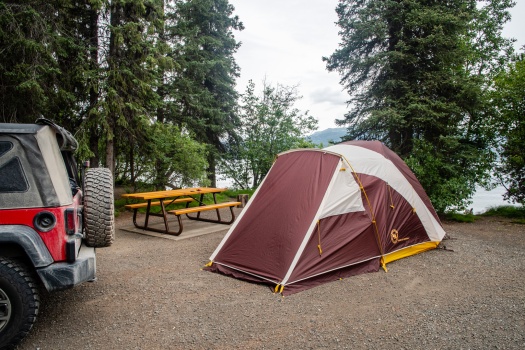 The next morning it was raining and the forecast from my satellite communicator said rain, rain, rain for the next few days. So I took my first full rain day and didn’t leave the campground at all. It was an ok time, I guess. I took some time to read, edit photos and even do some painting. I made use of the awning functionality of my tent, which is absolutely terrific. It enables me to sit in the shade and not get wet, but still see outside and even cook in the shade. At one point in the day a cyclist stopped by and sat under my awning and we chatted about our travels. Loving this tent!

It rained most of the next night. It stopped in the morning, so I made myself some coffee and sat for a bit, unsure of what to do. It still looked like it could rain any second. The thought of sitting around for another day didn’t appeal to me…so I packed up and headed out later in the morning, hoping that the rain would hold off. It didn’t… It started raining not long after I set off, and it was raining hard. I really want to enjoy the scenery, so I didn’t want to keep driving in the rain. I did get some interesting pictures of the road before it started pouring. 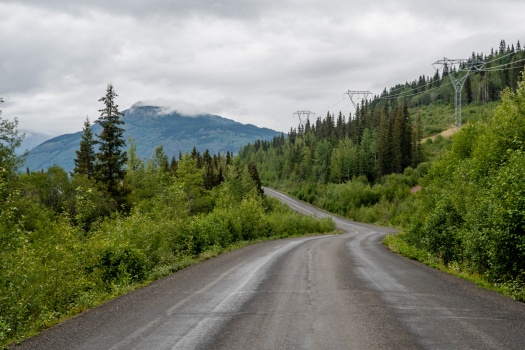 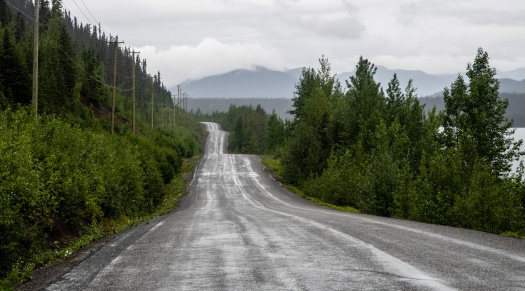 I hadn’t traveled far, and was approaching Iskut. I pulled into the Red Goat Lodge and saw that they had nice tent sites by the lake. I’m not sure why I didn’t just stay at the lodge…I guess I was impressed with my tent’s abilities. I managed to get the tent up in the rain without getting the inside overly wet…but at this point I was quite wet. It was getting cold too. About 12 degrees. Rain can be nice when it’s warm, but in the cold it can be a bit miserable. I changed into some of my new water resistant clothes, which actually worked quite well for the rest of the day. My awning doesn’t work quite as well in heavy rain, so I was kind of huddled in the corner, trying to stay dry. The view was nice at least. I chatted a bit with my neighbors who were also headed up to Yukon.  I have to admit on days like this, it can be kind of lonely…  At least my new sleeping bag and sleeping pad are warm and comfortable…on cold days like this one, I look forward to going to bed because I know I will be toasty warm.

The next morning it wasn’t raining, but it still looked stormy…as it had the day before. The forecast said it might clear a bit around noon and I wasn’t wanting to stick around, so I headed out again. It didn’t really clear up, but at least it didn’t rain. This time my destination was Dease Lake, as the plan was to drive Telegraph Creek the next day…if the weather cleared. As I pulled into Dease Lake, the sun started peaking through the clouds. I got gas and debated driving to Telegraph…but decided to stop at the campground. It was so nice to cook dinner in the sun. I hope this sunny weather continues. I’m sick of rain… 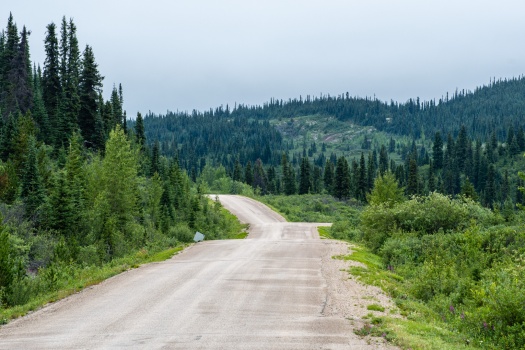 I have to admit, the rain makes me tired of road tripping…and it didn’t help that northern BC is a digital wastland, so I didn’t have cell service or wifi for a week…but road tripping has its trials…and it is worth it.

One Reply to “Farther 2019. Rain Days on the Cassiar Highway”