The time has come. I must say goodbye to my beloved Yukon. As you read this, I have already begun my drive back to Ontario.

As is tradition, I spent a few days just relaxing at a cabin in the woods. No electricity, no running water. Propane lights and stove and a wood stove for heat. I’ve actually really enjoyed the ambiance of the wood stove. It was also nice to live in some warmth and sleep in a bed for a few days after 26 straight nights of tenting…a personal record.

I’m not sure how to end this blog series…and I’m sure there will be more philosophical writing to come. So here are some interesting thoughts and insights after 3 months on the road.

When I arrived in the north, in early July, it didn’t really get dark at night. The sun still went down at a more or less normal time, but stayed not far below the horizon, so even at 2am it felt like early morning or late evening. After a couple weeks of that, I actually missed darkness. The interesting thing is, this trip has been long enough that the nights started getting darker until I regularly needed a flashlight in the evenings.

Somehow I had very few experiences of bad bugs. The bugs were bad in NWT in early July but by mid July I hardly had issue with them. Even in the wilderness of Yukon. I’m not sure if that’s normal, but it made an already amazing trip just that much better.

After a rough start with rain in BC, the weather really worked out. I actually used more of my rain days for non-rain reasons than I did for rain. Temperature wise, the hottest it got was 27, the coldest -4. There were probably only 10 or so nights where the temperature dropped below 0.

Forest Fires. It was set to be a bad year with such a dry spring, and there were already quite a few fires that could cause problems when I set out.
The fire near High Level, AB wasn’t an issue by the time I passed by.
When I was in NWT, I heard that Whitehorse was dealing with a lot of smoke being blown in from nearby fires. It was perfectly clear by the time I arrived.
When I was in Whitehorse I heard that the smoke had been bad in Dawson. Again, perfectly clear when I arrived.
In July there had been a fire near Keno City and there was an evacuation notice. The fire was smoldering when I went by in late August and it didn’t ruin any of the sights I planned to see.
A new fire started in the Stewart Crossing area…but after I had already been there.
There were a few hazy days that might have been from smoke..but it never ruined anything…if anything it might have enhanced things a bit.

It snowed in mid August. While there was no accumulation where I was in Tombstone, there were a few snowflakes in the air that morning, and I saw the leftover accumulation days later up in Wright Pass on the Dempster Highway. The snow on the mountain tops actually made the drive to the Arctic more epic than it otherwise would have been.

Meanwhile, from what I hear, this has been a decent September. When I first arrived and mentioned I would be tenting in September, I was met with some concern. Winter in September is a possibility in Yukon. Meanwhile, it was generally quite tolerable and I don’t think it ever got as cold as that day in August.

Being on the road for 3 months. Somewhere around the 1 month mark I found myself imagining home. Memories of good things back home would pop into my head. Usually I would long for home during the in betweens: after finishing a great adventure, but before I started the next. At some point I realized that my memories of home felt distant. As though they were in the process of becoming memory instead of simply an everyday reality. There was also a point where I realized that living in a tent had begun to feel normal…

I met some amazing people. Whether it was sharing coffee in the crazy wind at the Arctic Ocean, watching the sunset at the Midnight Dome, worshiping on Sunday, sharing shelter from the rain, enjoying a warm campfire on a cold night or shooting the northern lights together…I had many times shared with fellow travelers. The people I met made the experiences all the more special. Oh, and it turns out I had a number of automatic conversation starters with me: my Labrador hat, the gas cans on the Jeep, and my Ontario plates.

Fall colors peaked on the road to Tuk at the Arctic Ocean in the third week of August. My plan from the start had been to see the peak at the top and follow the colors as they made their way south. The locals weren’t sure it would work quite as I wanted. Somehow, God saw fit to let that plan work. The timing of it is crazy. Fall came to the Arctic early this year due to the cold snap.

Speaking of plans. I completed mine. There were a few changes to order and timing, and a few things that I didn’t see…(that had question marks on them anyway) I saw what I wanted to and have no regrets or wishes.

Near the end of my trip I had a few people ask me what the highlights were. What a tough question to answer! Off roading at Paddy Peak was amazing. The scenery at Tombstone was out of this world. Fall colors near Keno City were incredibly vivid. The adventure of the Dempster was beyond expectations. There is nowhere else that can match the majesty of the mountains at Kluane. And the North Canol Road was the best all around epic, remote drive. But honestly, the entire trip was one amazing moment after another. There are some trips you come away and have a specific highlight that makes you forget the rest. This trip doesn’t really have that moment. It was amazing adventures anew. Every morning!

God’s provision. I don’t think I’ve ever had a trip where I’ve felt so provided for and so loved by God as I have on this trip. There was no curveball, no issue that He couldn’t fix. Broken tent poles, blown fuses, broken chargers, windshield chips, closed campgrounds, computer issues, lost gas can nozzles, falling in the river while fishing…twice(that was embarassing). I forgot to charge my camera battery before going up in the plane over the icefields. It was warning me the whole time that it was on it’s last leg…yet it didn’t die. I had an issue with my camera’s memory card where it wouldn’t let me delete the pictures after I copied them to the laptop. Turns out I discovered the next day, the files had failed to copy to my laptop…was it God’s hand that stopped me from deleting the pictures? I think so. Eventually when something went wrong or broke, there was no stress about it. I simply thought: this will be an adventure…God’s got my back.

God’s love. I tend to struggle with the weather and timing and feeling like I’m not seeing the sights at their best. This trip, I felt like God was always setting up exactly the right weather and timing. If it was stormy, that was because there was an amazing photo opportunity waiting just around the corner. When it was cold and snowy in August, it made for some amazing snow on the peaks of the mountains. When it rained and I got slowed down, it just helped make the timing work perfectly for the fall colors. Nothing could ruin this trip. The forest fires disappeared, the cold weather stayed away except when needed. It was as though God was going before me, setting up one amazing experience after another. I’m still convinced that He woke me up one night just so I could see what is still the most amazing display of the northern lights I’ve ever seen. To feel God’s approval of my chasing after His wonders…is beyond words.

What an amazing time. I pray that the lessons I’ve learned with change me for the better and that others would be blessed through it.

One last thought. I’ve now driven more than 10,000 km in Yukon. I have spent almost 3 months here. That means: next to Ontario, I have spent the most time and driven the most in Yukon…in my life so far. I’m pretty sure I’ve spent more cumulative holiday time here than anywhere else, ever. To a certain degree, Yukon feels like home now. There’s a feeling of familiarity, of comfort that comes with the mountains and the spruce and aspen trees. People said the 3 months would fly by…which is true in some senses, but also, 3 months is a long time. I have memories of the beginning of my trip that are no longer fresh…that are already fading. In fact even memories from a month ago start to feel old. It actually feels like a long time since I’ve arrived. The seasons have changed, it’s cold now, the leaves are disappearing, it’s dark in the evening. I didn’t just go on holiday to Yukon. It feels like I’ve lived part of my life here. 6 years ago, I said goodbye to Yukon and was sad because I didn’t think I’d ever return…but I wanted to so badly. This time, I’m feeling very satisfied with my adventures. I’m sure I won’t feel an urge to return to Yukon for a long time. But…they say that once you’ve experienced Yukon, you can’t stay away for long. I don’t know if I’ll ever return…but it wouldn’t surprise me if one day I’m back in my home away from home: Yukon. 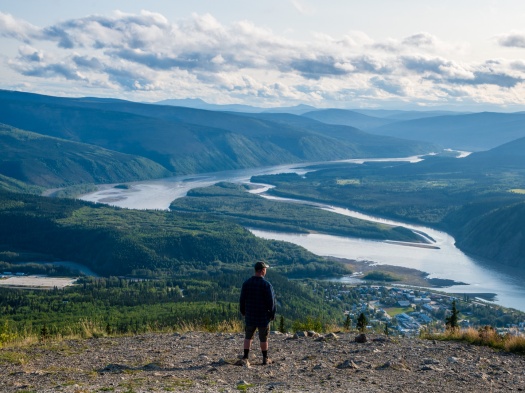