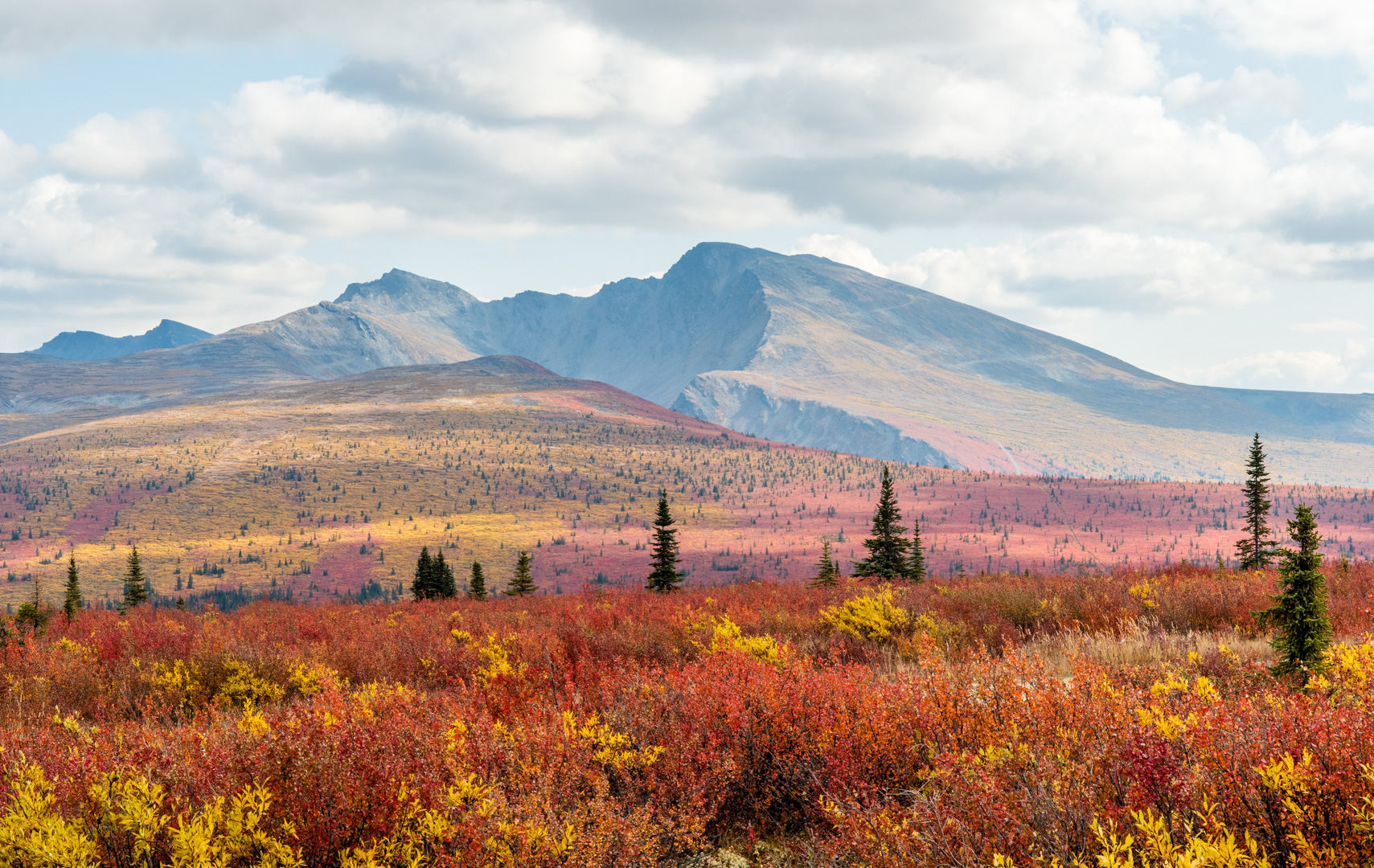 Somehow, Yukon still has wonders that can leave me in awe. On my way down from Dawson I drove up the Silver Trail. It’s a road that goes into the mountains where there was a lot of silver mining…along with some gold.

The first part of the road to Mayo is generally smooth and not super interesting…but I knew the end would be worth it. I got a campsite near Mayo at Five Mile Lake. I originally planned to stay the night then move to the campground at Keno City, but Five Mile Lake was so nice, I stayed there for 3 nights and just drove the extra 45 minutes into Keno each day. 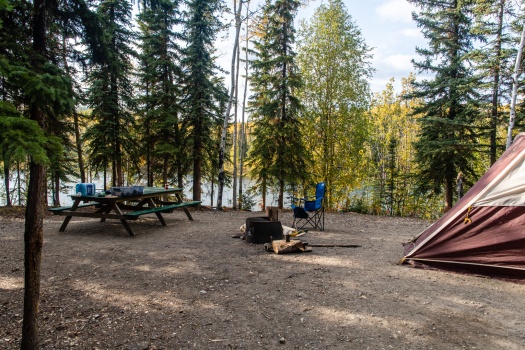 I got a campsite right by the lake. The fall colours glimmered across the water. It was quiet and calm. I spent each morning slowly, just taking it in. It was a bit warmer here than up north and I enjoyed it. My time here was relaxing and made me love camping again.

I also had a bit of fun with the critters. One night it was the squirrels, the next it was the Grey Jays. They were persistent too…I couldn’t leave a pan unattended by the cookstove.

So the next morning I set out for Keno. The road beyond Mayo was a bit more interesting as it rose out of the valley a bit and I could see across. The mountains were getting bigger again too. Across the valley I could see some kind of foggy haze covering everything. And then I saw the sign…

I had seen in the news over a month ago that there was a fire here and the area was evacuated. Apparently it’s just “smoldering” at this point. Or at least considered under control. Odd thing was, that sign wasn’t there on my way back the same day and it didn’t appear again…even though the smoke stayed.

The road also went by the ghost town of Elsa, which had a processing plant for one of the silver mines. It’s all fenced off, but you can still see some buildings along the side of the road.

Not much farther, I arrived in Keno City. The “city” in that name doesn’t really fit. It’s small. Very small. There’s maybe a couple of dozen people that live there, although it was bigger in the mining days.

I wasn’t here for Keno. I was here for Keno Hill and other roads in the area. There are mining roads everywhere here. Some are still in use, but many are abandoned and free to drive on. Plus they are up in the mountains with amazing views!

So I headed up Keno Hill. After everything I’ve driven, this road was great. And the views! AND THE COLOURS!! While everything was yellow down below, red coated the alpine. And here I was driving all over the mountainsides, surrounded by the most amazing mountains…vivid as though they were paintings. 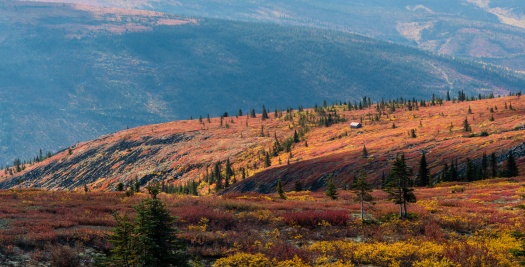 Unfortunately, the first day, I got to the top of the hill and the smoke from the fires got a little thicker, and the clouds rolled in. So most of the colourful pictures are from my second day of exploring. The first day I did get a chance to chat with some locals at the top, and I explored some old buildings that were scattered around the mountainside.

I ended my first day with a stop at the Keno Snack Bar, which is a must stop if you are in Keno. I swapped stories with another traveler while I was there and talked with the owner about Jeeps for a bit.

The second day, I headed right up Keno hill again. The smoke didn’t seem as bad, and the sun was shining. Someone had suggested I take the back way down, so I went that way. The back way goes by several old mines. Unlike the gold rush, the silver mines are shaft mines that go under ground, so there were a few openings(fenced off), with old rails coming out, and even a few old rail cars! I asked at the museum and these mines would have shut down in the 50s or 60s. They still have silver in them, but the price of silver isn’t high enough right now. 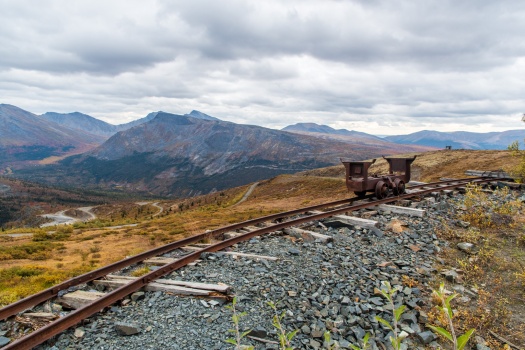 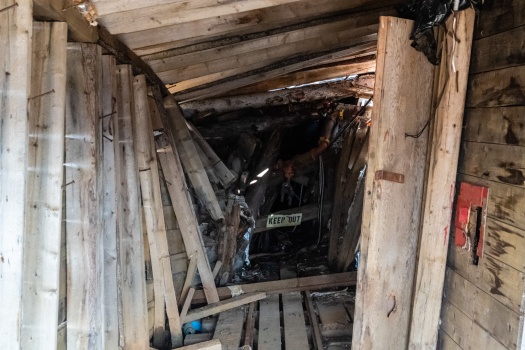 Of course the road was a fun drive too. This was setting up to be an amazing day. If only I knew what was coming! 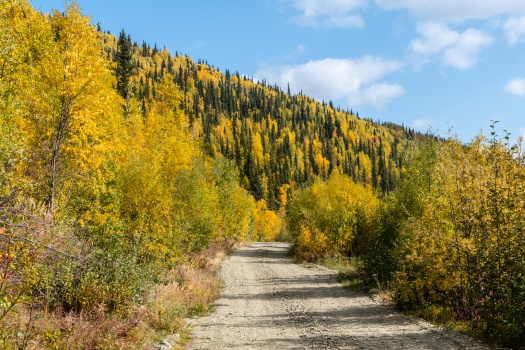 I had been told about other hill that was worth driving. Sourdough Hill was across from Keno Hill and I could see it winding up the mountainside. That was my next destination. I made a wrong turn…which normally isn’t possible in Yukon, but there are so many roads around Keno. I came across a guy in a pickup going the other way who told me where I went wrong.

The road up Sourdough was a bit steeper so it climbed to the alpine really quickly. And it was glorious. Red, red, red…everywhere! 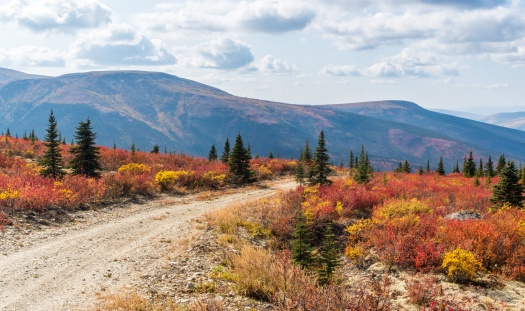 The road continued on past the top and went down again. I pressed on. Descending into the valley, I could see an epic road up ahead! I was excited now!

After a couple of small creek crossings, I arrived at the bottom and my heart sank. It looked rough…and steep. Out of all the terrain I’ve driven on, long steep hills scare me the most. Yet, I know the Jeep can handle them.

I sat there in indecision. The alpine didn’t look that far away, so I decided to walk it. As I got up, out of view of the Jeep I realized it was more of a walk than I thought it was…but I also saw that the road was actually decently smooth past the first part. It was just really steep. So I walked back down…convincing myself the whole way that this was worth doing.

Shifting the Jeep into 4-low, I started up. The rough part wasn’t actually that bad…it was just really steep. And it kept getting steeper! Eventually, I was on perfectly smooth road, but it was so steep I was losing my confidence in the grip of my wheels…even with 4×4. There aren’t many pictures from the climb because there was no way I was stopping…what if I couldn’t get moving again? It did level out after the worst part…or at least it became less steep. 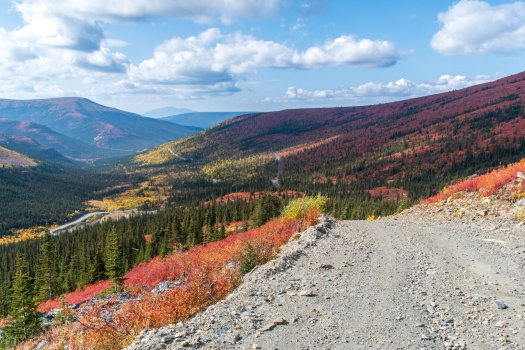 It did eventually become more level, even if there was still an uphill slant. It was flat enough I was comfortable getting out and leaving the Jeep in park. I’ll admit, I was shaking a bit from the adrenaline… The views were amazing though.
(I looked it up later…it took me 15 minutes of slow, steep, uphill driving to get to this point…)

There was a spot to turn around, but I could see the road stretching across the mountain side. I knew I had to experience that if I had made it this far. So I kept going. Ever upward. It helped that the road was smooth and wide enough I could turn around carefully even without a spot. 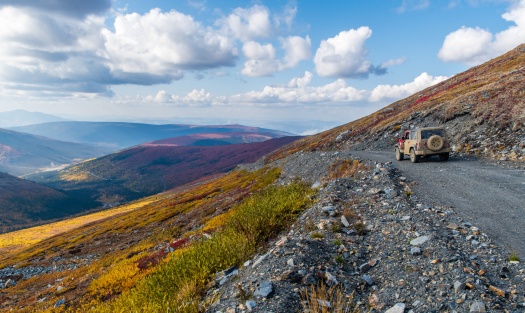 The views and experience of the mountain side were amazing. I was really starting to feel the height of it all. This is the base of Mount Hinton, the summit of which is one of the higher peaks in the area. Even down where I was, I definitely felt on top of the world.

While I was up there I took some time to just be quiet and experience it all. There’s something special about these moments. Yes, there are wonderful views I can see without involving crazy roads…without any fear or danger. But somehow, there’s something extra to these moments. The trial of getting there is worth it in the end. And I know God was watching out for me. I find it interesting that God’s creation includes places like these that cannot be truly experienced without danger or risk. Even before the road was there, someone would have had to hike and climb this mountain.

Either way, it has been an amazing time. I was not expecting the exploring to be this good, nor was I expecting such absolutely brilliant fall colours! I am reinvigorated again! Onward!